How to be the digital mentor your child needs

Managing kids’ devices is critical for their health and wellbeing. But parents who also mentor their kids’ screen-time see the most positive outcomes.

Technology overuse is now the number-one fear for parents of teens, with moms and dads of toddlers and preschoolers not far behind.

Recent research from the nonprofit Common Sense Media shows the average five-year-old now spends over two hours per day—or about 20% of their waking hours—on a screen. Tweens’ screen-time balloons to about six hours daily, while their teenage brothers and sisters are on their devices for an average of nine hours per day. That’s over an hour longer than the typical full-time workday. So, it’s no wonder that parents are growing increasingly more concerned with how to parent in this digital age. 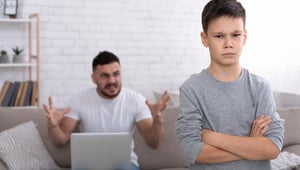 Not so long ago, an authoritarian “us versus them” approach was hailed as an effective digital parenting strategy, complete with rigid rules backed up by threats to disconnect or (the ultimate weapon) confiscate devices.

But in today’s always-connected digital landscape, there is one problem with that approach—it doesn’t work, according to many experts.

The limits of control

Dr. Devorah Heitner, a digital parenting expert and author of Screenwise, is one such expert. Heitner says parents who think confining screen-time to a magic number of minutes per day are kidding themselves.

The key to ensuring our kids’ digital wellbeing is understanding why they’re using their devices and helping them shift their habits in more healthy directions.

Oxford University researcher Amy Orben, for example, found the impact of technology use on teen’s mental health to be much less significant than previously thought. In fact, the effect is “so small that it’s surpassed by whether a teenager wears glasses to school,” she says.

Heitner also challenges the view that screen-time alone is “destroying a generation” in the words of one controversial article that appeared in The Atlantic in 2017.

“If you hand a happy kid a phone, they’re not going to turn into an unhappy, miserable kid,” she insists—although it can “turn up the volume” on underlying issues like anxiety or ADHD.

So what approach should parents take?

First, experts say parents do need to impose some non-negotiable time-management rules. Devices need to be banned at the dinner table, full stop, and they also need to be disconnected at bedtime, preferably an hour before sleep. In these two instances, the research is clear.

Children need to switch off before bed to ensure good quality sleep, and to remove the temptation to “vamp” on their devices into the wee hours. 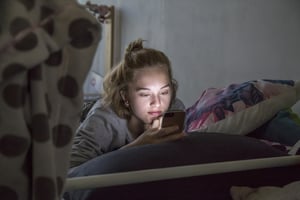 And mealtimes, too, need to be kept tech-free, as a way to facilitate conversation and family bonding—not to mention simple eye contact!

Managing internet use during study time is another way parents can apply sensible rules to their children’s screen-time.

But the overall approach with the best chance of success—say, experts—is mentoring.

“Mentoring is knowing the difference between Minecraft and Fortnite,” says Heitner—and considering how playing in a competitive mode (Fortnite) will have different effects compared to a collaborative mode (Minecraft).

Mentoring means not belittling your daughter’s YouTube addiction—but understanding that the channels she follows may be discussing issues that matter to her, like body image and self-esteem.

It means examining why your son’s love of Twitch—where he watches other people play online games—strikes you as a waste of time.

But mentoring goes beyond understanding your children’s online habits. It also involves being more proactive about introducing non-screen-based activity. Heitner is a fan of children of all ages doing more chores—starting at preschool age. She also encourages parents to integrate more fun, screen-free family activities, whether that's board games, hobbies or outdoor activities.

Encourage them to self-regulate

But mom and dad won’t always be there to enforce their rules or reinforce their values. Ultimately, what our children need to develop most are self-regulation skills. One way to do this is to ask your children to monitor their own moods after a particular online activity, whether social media or gaming. A color chart can be a fun and easy way of doing this.

What they discover about themselves may prove to be the most powerful screen-time control tool of all.

Keeping up with all the latest apps and games can be a full-time job for today’s parents. Luckily, you don’t need to go it alone. Family Zone cyber experts and app reviews will help you stay up-to-date in an ever-changing digital landscape

Previous post
Juggling screen-time in the Age of Coronavirus, and other feats of extreme parenting
Next post
The most important lesson your child is NOT learning at school today