Screens, sleep, and self-regulation: Which kids are most at risk?

We are learning more every day about the impact of screen-time on our children’s minds and bodies - and that includes the link between screen use and sleep quality.

Clearly, some children are affected far more dramatically than others. A new study helps explain why.

The evidence for the link between screens and sleep has been mounting for over a decade. Kids who routinely use screens at bedtime - and adults too for that matter - will almost certainly sleep less soundly. There are physical reasons for this as well as psychological ones.

The blue light emitted by screens has long been shown to interfere with the release of the sleep hormone melatonin. But the cognitive arousal kids experience from fast-paced games and videos or drama-filled social media posts is another major factor.

Winding down from all that on-screen action takes time. And that’s why experts unanimously advise powering down devices an hour before bedtime and keeping screens out of bedrooms entirely.

Research has also clearly established the relationship between sleep and mood, sleep and academic achievement, and sleep and “executive function” (basically, all those cognitive activities around memory, judgment, planning, and problem-solving, and self-awareness). Kids who under-sleep at night are kids who under-perform by day. They feel worse and they do worse.

Yet it’s also the case that some kids will struggle more than others with screen-related sleep issues, according to a study by psychologists at Arizona State University and published in the journal Psychological Science.

Children who scored low on a measure psychologists call “effortful control” were the ones who suffered especially severe fallout from device use at bedtime.

What is “effortful control”? Essentially, it’s the ability to self-regulate - to maintain focus easily and delay gratification when necessary. A child who struggles to wait to unwrap a present, for example, or to raise his or her hand in class instead of calling out is showing signs of low effortful control.

Obviously, some degree of self-regulating behavior develops over time as children mature. But psychologists are now seeing it as a dimension of temperament - that is, a tendency that comes “baked in” to some personalities and not to others. 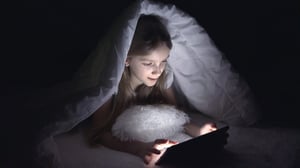 Kids who exhibit low effortful control may need extra help when it comes to all kinds of self-regulation - and they are also the most at risk from screen-related sleep issues, according to the Arizona State study.

The research team followed 547 kids aged 7-9 for a week, tracking device use, and sleep patterns. Parents kept daily diaries of their children’s screen-time and completed a survey about their temperament.

On average, the children slept 8 hours a night and used screens before bed 5 out of the 7 nights studied. Those children who didn’t use devices at bedtime slept 23 minutes more and went to bed 34 minutes early than their screen-using peers.

But the effect was especially dramatic for the low effortful control children, who lost 40 minutes per night after screen-time before bed.

Interestingly, the study showed that children who scored high on effortful control - about a third of the sample - were not affected by bed-time screen use.  (Note that only sleep quantity was examined, not sleep quality.)

The researchers stressed that, because effortful control is a personality characteristic, it can be difficult to change.

"Instead of parents wondering how to help their child better regulate their behavior,” noted senior author Leah Doane, “they can try to focus on creating more consistent sleep and media use schedules.”

Previous post
How technology is — and isn't — affecting your child's mental health
Next post
Will violent video games make my child violent?